How Are Women’s Access to Period Products Affected by Poverty and Incarceration?

Society tends to shove topics under the rug that seem “too scandalous.” However, by refusing to address certain matters, we’ve come to overlook the glaringly-obvious pandemic that’s occurring right under our noses: period poverty.

According to the United Nations Population Fund, period poverty is the “struggle that many low-income individuals face while trying to afford menstrual products.” It also refers to the “increased economic vulnerability” they face due to the cost of access to supplies. This extends beyond accessibility—it includes having the privacy to change products, disposing materials, and being able to wash and have a toilet. It was found that individuals were forced to use dirty rags, newspapers, cardboard, and other materials due to the inability to find safer, affordable products. Furthermore, the lack of facilities and prices of products contributed to 70% of reproductive diseases including STIs, HPV (disease that can cause cervical cancer), and toxic shock syndrome.

There are many reasons as to why products are so inaccessible, such as the tampon tax that affects 23 states, products not being covered by public health programs, stigma, and more. Period poverty targets certain factors such as race, environment, education, income, and even culture. It was found that those who experienced period poverty every month included Latinx communities at 17%, individuals of another race 13.3%, white at 9.1%, and Black at 7.6%. For college students, it was found that one in five first gen students reported past year period poverty, and 10.3% reported monthly. Additionally, links of period poverty and depression have been seen, an example being that 48.4% of college students reported moderate to severe depression due to this inequality. Unsurprisingly, COVID-19 has also impacted accessibility due to competition for resources, as well as higher rates of job loss and unemployment.

Period poverty is a cycle that perpetuates the stigma of menstruation, as well as poverty and adverse health outcomes; however, this epidemic also targets students almost as young as 9 years old. It seems surprising to think that America—a nation that symbolizes wealth, opportunity, and power—is in a public health crisis that affects 50.47% of women. In a study performed at a middle school in St. Louis, it was found that early half of the students needed menstrual products but were unable to afford them. Additionally, almost ⅓ of students missed at least one day of school due to the stigma and shame, and almost 40% of British students missed school due to lack of accessibility. The long term consequences of missing school—considering menstruation occurring every month—lead to increased rates of high school dropouts, critical health outcomes, and poverty in adulthood. 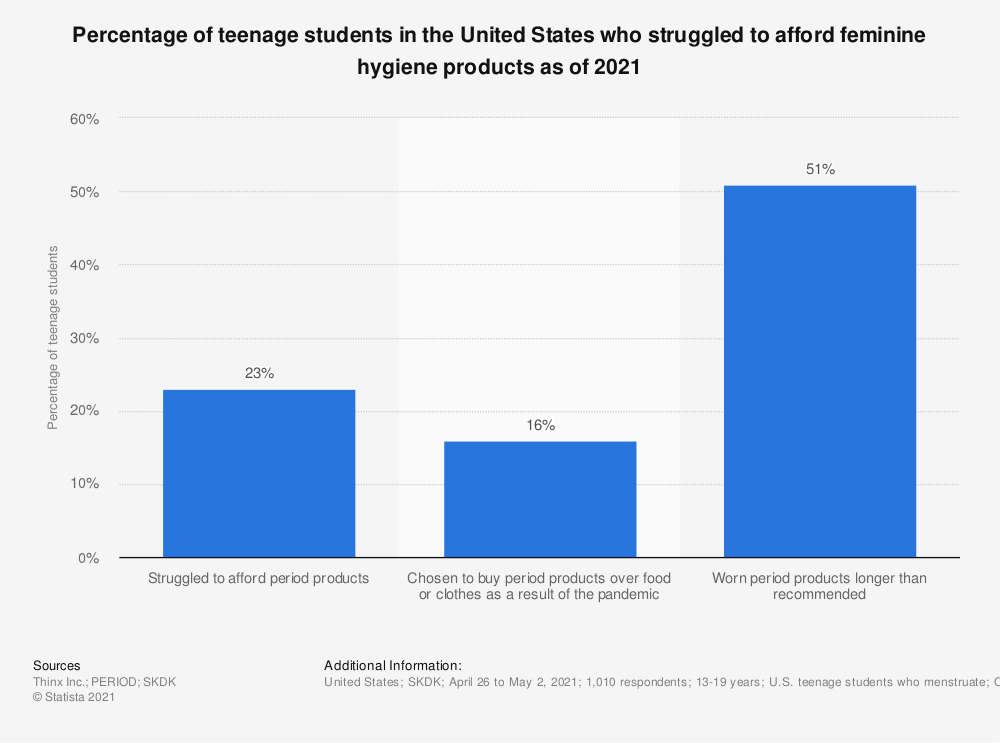 The hidden population of this pandemic are the incarcerated women. Currently, 15 states have laws that provide free products. However other laws do not explicitly ensure this. It was found that 80% of inmates cannot afford to pay $2.63 for a pad. Most earn 75 centers or less a day and are forced to choose between other necessities such as toothpaste ($1.50), deodorant ($1.93), a 15 minute phone call to family or attorneys ($2.12), and a medical visit ($5). In some states, policies that require individuals to submit requests for products have experienced abuse by staff due to coercion and sexual abuse. One woman, Chandra Bolzeko, an inmate at York Correctional Institution in Connecticut, writes that the “lack of sanity supplies is so bad in women’s prisons that I have seen pads fly right out of an inmates pants: prison maxi pads don’t have wings … so when a woman wears the same pad for several days because she can’t find a fresh one, that pad often fails to stick to her underwear and the pad falls out. It’s disgusting but it’s true.” She also adds that asking a “macho guard for a tampon is humiliating” and that ultimately, it’s an acknowledgement to the fact that the “prison controls your cleanliness, your health and your feelings of self-esteem.” Furthermore, Bolzeko emphasizes that “asking for something you need crystallizes the power differential between inmates and guards; the offer can either meet your need or refuse you, and there’s little you can do to influence his choice.” Other stories have revealed that correctional officers have withheld items to coerce prisoner to have sex with them. Bolzeko’s story emphasizes the important fact that period products are not a luxury, they are a right.

Period poverty is a human rights issue that should be talked about. This inequality is a cycle—and one that will continue to occur if we don’t start talking about it. Even something as simple as using code words when referring to periods, such as “shark week” or “Aunt Flo,” perpetuate the stigma around a naturally occurring function (a testament of health!) that should be celebrated. Another way to stop the cycle is to choose menstruation products from brands that support ending period poverty such as freedom4girls, Cora, and more. Additionally, donating to charities such as PERIOD, Dignity Period, and even signing petitions on change.org can help. It is also important to donate menstrual products to local shelters. By educating yourself and others, we can begin to overcome this crisis together.